Scientists have now found oxygen in its hazy halo, a discovery that could change our understanding of how the solar system formed.

The findings, which baffled the Rosetta team, were published in the journal Nature.

Oxygen is common on Earth, and is abundant in the universe. However, scientists are puzzled to have found traces of the element on its own on the comet. What also surprised them was how long it had been there: since the comet’s formation before our own solar system.

I've detected molecular oxygen that was likely incorporated into #67P during its formation! https://t.co/Mpqe21Dt57pic.twitter.com/LOFKzp9B9K

A decade ago, Rosetta the spacecraft and Philae the robot set out to catch comet 67P. Last year, Rosetta dropped Philae onto its surface to study it more closely. The tools on Rosetta already found earlier this year that the comet had its own kind of water.

Comets are of huge interest to scientists because, to human knowledge, they are the most ancient bodies of the solar system – the building blocks from which our sun and planets were formed some 5 billion years ago. 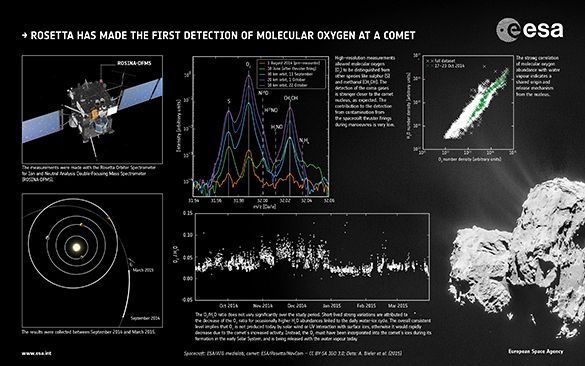