When the Greek coastguard was recently accused of sinking a boat with asylum seekers, the world threw its hands up and cried foul.

But, according to Amnesty International, this is a practice that has been happening on a regular basis over the past three years.

The most recent event, which took place a few miles off the Greek islands of Kos, has yet to be verified, and the Greek authorities have denied any culpability. But the human rights body says refugees trying to reach the EU via Greece are being routinely and unlawfully pushed back to Turkey by Greek coast and border guards.

A push-back is when coast or border guards turn groups of migrants back across the border, denying them the right to have their individual cases heard or to challenge their expulsion.

Amnesty says Greece is in breach of its international obligations and EU law.

Gauri van Gulik, Amnesty’s Deputy Europe Director for the European Union and Balkans teams, said: “This is an ongoing situation that has been taking place on the Greece-Macedonia border, the Greece-Turkey border and the Italian sea border. All those different spots have shown violations of human rights.

“Every single person who crosses the border has the right to an individual procedure to claim asylum. It is always illegal to push them back to where they came from.”

The Aegean Sea crossing has become increasingly popular after authorities built a 10-kilometre fence and deployed nearly 2000 border guards along the border at the river Evros. 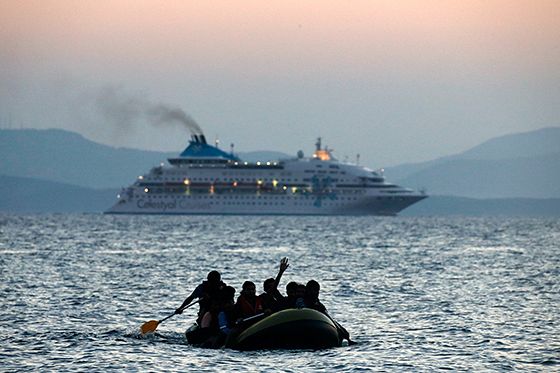 Amnesty says it has documented cases where the Greek border officials abused the rights of migrants trying to enter the country.

In one report, 13 interviewees who claim to have been returned to Turkey describe to Amnesty how their inflatable boats were rammed, knifed, or nearly capsized while they were being towed or circled by a Greek coastguard boat.

One such example is the story of B and his family. B fled Afghanistan after his parents and older sister died in a bomb blast in Gnazni. He left his homeland and eventually ended up in the Turkish coastal city of Izmir.

From there they were put on board a rubber dinghy with 36 others from Syria, Sudan and Iran. They were told by smugglers to aim towards the lights in the distance, which they said was a Greek island.

He recalls: “We left at 11.15pm. This was in late February 2013. But we couldn’t reach the island. We were at sea for three and a half hours. Then the Greek boat with Greek police found us. They took us on to their boat. They beat us very badly. They took all our money, our mobile phones, our clothes, everything we had.”

They left us with nothing but a damaged boat

“At around 6am they took us back to Turkish waters; they put us back on our own boat, they scratched one side of our boat with their knife, they damaged our boat and they took away the motor and left us in the middle of the sea. We were 42 people altogether. There were three small children with us: my niece and nephews. There were also other children, but they were older… we were left in the middle of the sea, with nothing but a damaged boat.”

Testimonies collected by Amnesty point to many cases of people being “slapped, beaten and manhandled”. Those interviewed spoke of being searched, having mobile phones, jewelry and money either taken or thrown into the sea.

Amnesty's mission to #Greece:We recorded push-back stories and people who are detained for months! europeanparliam</a> <a href="https://twitter.com/hashtag/SOSeurope?src=hash">#SOSeurope</a></p>&mdash; S.O.S. Europe (SOS_Europe) May 30, 2013

“The number of push-back stories we collected is extremely alarming. It suggests that the Greek authorities are employing this practice on a regular basis, despite the fact that it is unlawful. And it is also extremely dangerous – to the point where it puts people’s lives seriously at risk.”

Van Gulik added: “The EU must accept that it will have to take on a fair share of refugees. We have a global refugee crisis. There are 19 million refugees worldwide at the moment. We are seeing an unprecedented crisis.”

When asked about holding nation states to account for push-backs, van Gulik said there were cases where countries were being prosecuted.

“There are prosecutions of smugglers in the pipeline. There is also one case in Spain against the state on a push-back where migrants died. This is slowly happening. It is possible to hold people to account, as long as you have witnesses and evidence.”

She said it was not Amnesty’s role to sue governments. “We help and support cases. It could be in Greece that local people will take the state to court. That is why we document, that is why we gather evidence.”