German Chancellor Angela Merkel drew mockery online on Thursday for stroking the back of a Palestinian girl facing possible deportation after she had reduced her to tears by explaining her policy on asylum and adding that “sometimes politics is hard”.

One participant defended her, saying he respected her attempt to explain the situation where other colleagues might “talk around it”.

The hashtag #merkelstreichelt (merkelstrokes) and video clip of Merkel’s exchange with a roughly 10-year old girl went viral. The girl, identified as Reem, from Lebanon has lived in Germany for four years but her family may be forced to leave.

During a discussion forum in the northern city of Rostock organised by the chancellor’s office, Reem told Merkel in good German she wanted to study in Germany. It was unpleasant that she could not share the enjoyment of life experienced by her peers because of uncertainty over whether she will be able to stay, she said.

At that point Reem cried.

Looking surprised, Merkel walked up to her and said: “Ah, you did a great job.”

The moderator of the discussion intervened to say the young woman was crying more because of her difficult situation than over whether she had done a good job in presenting her views, Merkel retorted: “I know … Still, I want to stroke her.” She then stroked Reem on the back.

“With the chancellor in the zoo,” tweeted Torsten Gaitzsch.

“#merkelstrokes with the cold hand of an ice queen” wrote Martina Wilczyniski. 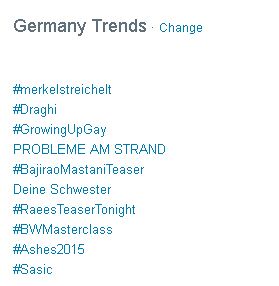 Felix Seibert-Daiker, who moderated the forum, told the Sueddeutsche Zeitung that Merkel had reacted in a humane manner.

“Of course, we all would have liked Merkel to take Reem in her arms and say ‘you can stay’ but that is not the situation.” He said she respected her attempt to explain the political situation to a child. “Many colleagues would have talked around it.”

Immigration has shot up the political agenda due to mounting fears among Germans about how to cope with a flood of asylum seekers, especially from the Middle East and Africa and many of Merkel’s conservatives want her to take a harder line.

Reflecting mounting resentment among Germans, the number of attacks on refugees is rising. So far this year there have been 150 such attacks, already nearly as many as in the whole of last year. President Joachim Gauck this month warned that xenophobic attitudes are taking root.