Saudi Arabia is looking for eight religious functionaries, or in modern parlance, executioners.

The gulf state needs extra staff to carry out the increasing number of death sentences, usually carried out by public beheading.

Hey, want to be an executioner? #SaudiArabia has 8 openings. Apply fast for this growing career opportunity | http://t.co/zznh0cSQCA

The job may also involve amputations for those convicted of lesser offences, the advert said, and no special qualifications are needed.

According to Saudi Arabia’s official press agency, the country beheaded its 85th victim on Sunday. This compares with more than 90 for the whole of last year, according to an Amnesty International report on the death penalty in 2014.

Most were executed for murder but 38 had committed drug offences. Half were from Saudi Arabia and the others were from Pakistan, Yemen, Syria, Jordan, India, Indonesia, Burma, Chad, Eritrea, the Philippines and Sudan.

Diplomats have put the increase in the number of executions down to more judges being appointed, allowing for a backlog of appeal cases to be heard.

A downloadable PDF form for the job says the successful applicants would be paid at the lower end of the civil service pay scale. 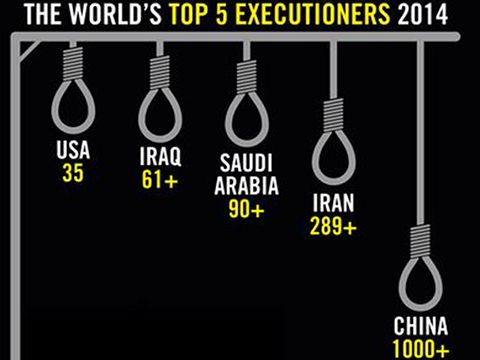