The floods in Northern India, triggered by heavy monsoon rains more than 10 days ago, have killed at least 822 people in the Himalayan state of Uttarakhand and forced tens of thousands from their homes.

Officials say the death toll may pass 1,000 and thousands are still reported missing. Aid groups are now warning that rotting corpses and the destruction of sanitation facilities could contaminate water sources, leading to outbreaks of diseases such as cholera and dysentery.

“We are getting reports from the field that there are rotting bodies lying around, many of them semi-buried in soil and rubble that came down from the mountains,” said Zubin Zaman, Humanitarian Manager for Oxfam India, which is working in Rudraprayag, one of the worst affected districts.

“There are also carcasses of livestock in rivers and streams and this has, of course, contaminated so many of their water sources. But people are desperate and are being forced to consume water they wouldn’t otherwise.”

Zaman said he was concerned about outbreaks of water-borne diseases, adding that he had received reports that 400 people were admitted to a medical camp in Sonprayag.

The disaster – the worst floods India has witnessed since 2008 when around 500 died in the eastern state of Bihar – has swept away buildings and farmland, destroying major roads and bridges.

An Indian air force rescue helicopter crashed on Tuesday, killing 20 people on board. The air force said the helicopter was delivering wood for the mass cremation of bodies found in and around the temple town of Kedarnath.

The Times of India reports that the helicopter crashed late on Tuesday when its rotor blades hit the hillside after a rescue operation. Among the bodies were five air force crew members, Air Chief Marshal N A K Browne told reporters.

Television channels broadcast dramatic pictures of desperate pilgrims scrambling to get aboard dozens of military helicopters which have been ferrying people to safety.

Continuing rain and dense fog have slowed down the air rescue operation.

Around 96,500 people have so far been evacuated by land and air, according to media reports. 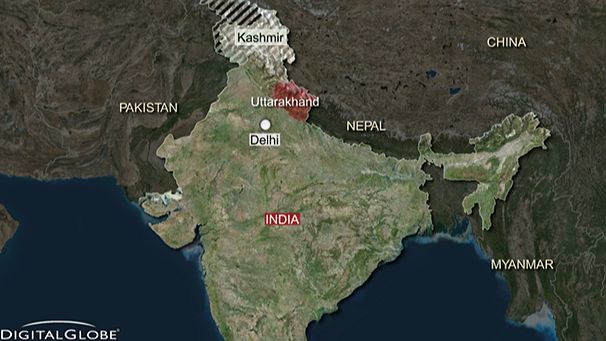