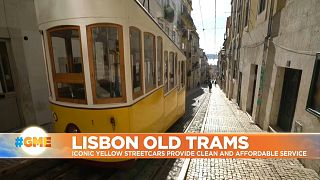 The eléctricos as they're known locally provide clean, efficient and accessible transport for Lisbon dwellers and tourists. Now city authorities are eyeing up the 100-year-old iconic streetcars in an effort to reach a 2050 climate-neutrality target set by the European Union.

Miguel Gaspar, Lisbon's Deputy Mayor for Mobility says that the city is reinforcing its fleet:

"So basically we are buying new vehicles to have more frequency on the lines. And we are also launching new lines of trams." And Gaspar goes on, "we are also reinventing the old tram because we need more and more in the older part of the city, where the new modern ones don't fit. We need these old ones that are smaller and better in our streets."

The European Union is pushing a new climate-neutrality target, which means emissions from transport will have to fall by about 90 per cent in Lisbon.

"We have a strong policy to promote public transport. We have cut the fares and we actually increased demand by almost 30 percent in one single year," says Gaspar, finally conceding, "of course, at city level, we are (also) using the resilience funds from the European Union."