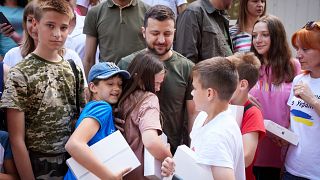 President Volodymyr Zelenskyy travelled to the Zaporizhzhia region in Ukraine's southeast on Sunday making only his second public visit outside the Kyiv area since the war began.

He met with local officials, police, and soldiers -- and also internally displaced Ukrainians in the region, which is now partly under Russian control.

Speaking afterwards in a self-recorded video address to the nation, Zelenskyy said he was "proud of everyone whom I met, whom I shook hands with, with whom I communicated, whom I supported".

The displaced residents he met had managed to escape from Mariupol, the large port city destroyed by Russian bombing. The families including children had been received  "humanely and warmly", he said.

"Conditions - I saw - are temporary, but not bad," he said, adding: "Each family has its own story. Most were without men. Someone's husband went to war, someone's is in captivity, someone's, unfortunately, died. A tragedy. No home, no loved one. But we must live for the children."

Back in the capital, the railway infrastructure appears to have borne the brunt of Russian missile strikes.

The Kremlin claimed to have targeted a site storing tanks supplied by Europe. Kyiv was hit for the first time in months having largely been spared recently as Russian forces concentrate attacks on Donbas in eastern Ukraine.

Russian President Vladimir Putin has vowed to extend his targets if the West carries through with its promises of sending longer-range weapons to Ukraine.

Despite the warning, Britain says it is going ahead with sending Ukraine such a shipment of rocket artillery which is more modern than those currently being operated by its troops.

In the meantime as Moscow continues to throw all its power into capturing the Donbas one of its airstrikes struck the eastern city of Druzhkivka, destroying buildings and leaving at least one person dead.