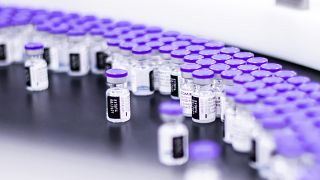 Pfizer and BioNTech have said that initial data show a third booster shot of their COVID-19 vaccine could boost immunity.

The companies said in a press release that vaccine efficacy in preventing "infection and symptomatic disease" declined six months after inoculation, according to data from the Israeli Ministry of Health.

Initial data from a booster trial, the companies said, showed that a third shot given six months after the second dose provided more immunity to variants.

They plan to seek authorisation for the third dose.

Data has shown that the vaccine prevents severe illness against all currently known variants.

For instance, research from France's Pasteur Institute suggests that people are mostly protected from the Delta variant after two doses of Pfizer's COVID-19 vaccine.

But Pfizer and BioNTech are working to create an updated version of the vaccine to combat the highly contagious Delta variant first identified in India.

"The first batch of the mRNA for the trial has already been manufactured. The Companies anticipate the clinical studies to begin in August, subject to regulatory approvals," the release said.