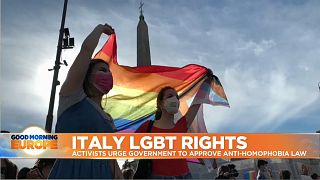 Unlike many of its EU partners, Italy still does not have laws to punish homophobic hate crimes.

But now a law proposed by Alessandro Zan, an MP with the Democratic party, has been passed by the lower house and will now go to the Senate for approval.

The proposed legislation would punish discrimination and hate crimes against LGBT and disabled people as well as misogyny. Both the church and extreme right politicians have opposed the measure, claiming it will suppress opinion and religious beliefs.

The president of the Italian Bishops Conference has urged lawmakers to change the law rather than abolish it, although the group has warned in the past that the new bill could ‘stifle’ those who hold more traditional views.

Orazio Schifone, a victim of an unprovoked hate attack a few months ago, told Euronews why he did not report the case:

“If there had been a law back then I would have reported the incident. I decided not to report it as I thought nobody was going to listen to my story," he said.

"In the end, the authorities would not do anything about it.”

In recent weeks, Italians have taken to the streets calling for the approval of the bill, while TV personalities and artists have joined the public debate. Thousands of people gathered in one of Rome’s biggest squares on Saturday.

“This government will be in office only for another year and a half. There is not much time left, if the proposed law will be modified, it has to be sent back to the lower house for approval,” said Claudio Mazzella, president of the Circolo Mario Mieli project.

"We know that in autumn the priority will be the budget bill. If this happens there is no time left to pass it. We, therefore, urge parliament to approve the original version straight away.”

Although the law has received the all-clear by the Senate’s Justice Committee, a date for the debate in the Senate has not yet been scheduled. Many fear far-right politicians including might further delay its approval.