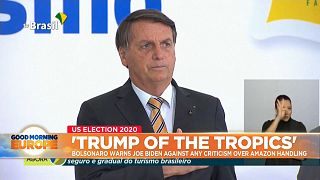 Will Trump's defeat dent the ambitions of authoritarian leaders?

Viktor Orban is one of several global leaders who forged close links with US President Donald Trump. The Prime Minister of Slovenia, Janez Janša, went as far as to congratulate Trump on his victory, even before a clear winner had been projected.

Right-wing leaders, including the presidents of Poland and Turkey, will be watching the moves at the White House closely, knowing that past diplomatic relations may be substantially changing. Trump has so far refused to acknowledge Joe Biden’s win, despite all projections showing exactly the opposite. The President's team has also failed to show evidence of systemic vote fraud or wrongdoing.

A loyal fan on the international stage, the Brazilian president Jair Bolsonaro, once dubbed the 'Trump of the tropics' went further, suggesting the use of gunpowder in a rant towards the president-elect:

"We have recently seen a chief of state candidate (Biden) saying that if I don't put out the fires in the Amazon, he will impose trade barriers against Brazil. How can we confront this? We know diplomacy alone is not enough. When the yelling is over, gunpowder might be needed. We don't even need to use the powder, but they need to know we have it. "

Pawel Zerka is a Policy Fellow at the European Council on Foreign Relations. He thinks populist leaders such as Bolsonaro and Orban have their own internal problems to contend with, and a Trump retreat would "not necessarily mean a change in their standing."

Watch Good Morning Europe's full report in the player above.