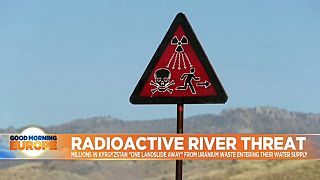 Kyrgyzstan town 'one landslide away' from radioactive catastrophe

Decades-old uranium stockpiles are threatening the water supply of millions of people in the mountainous peaks of Kyrgyzstan - prompting an urgent call for help to prevent a radioactive catastrophe.

It's said to be one of the most polluted places on the planet - the land near the town of Mailuu-Suu in Kyrgyzstan.

It's due to nearby Soviet-era radioactive waste dumps - thousands of tonnes of uranium ore that have been buried as a by-product from the milling of the metal along the river that runs through it.

Hidden in this remote gorge, environmentalists say the radioactive waste is just one landslide away from contaminating the water supply for the Fergana valley, the most densely populated part of Central Asia and home to millions of people.

Since the waste was buried in the late 1960s, there has been little monitoring or maintenance of the dumps and according to the International Atomic Energy Agency Mailuu-Suu is in urgent need of a cleanup.

While the international community is starting to wake up to the ticking timebomb, one local doctor who has lived in the area for 35 years has conducted his own research.

"There are places here with background radiation more than 100 micro-roentgen per hour. Recently two or three years ago they built two, three houses there, in such a place," said Tynarbek Dokbayev, the Medical Centre Director in Mailuu-Suu.

The effects are already being seen in the health of some residents. Almost everyone in this mining town can recount tales of recent deaths amongst family and friends, often related to cancer.

"The majority of the adult population suffers from diseases of the digestive system and blood vascular glands. It is four times as high here as the average in the Republic of Kyrgyzstan," said Bolotbek Karimo, a local ecologist.

For some, it's too late. Many of the elderly in the town have long had to deal with the daily struggle of living in the contaminated area.

"They suggested I move. They said 'Go and build your house there", but without help'. They don't give us any money," said Enver Berber, a long-time Mailuu-Suu resident.

The EU Commission and European Bank for Reconstruction and Development are raising around 30 million euros needed to reinforce or relocate the Mailuu-Suu dumps and to dispose of other hazardous materials.

For the next generation, it can't come soon enough.