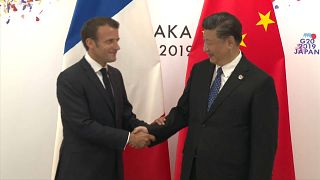 President Emmanuel Macron of France arrived in Beijing on Monday to begin a 3-day official state visit in which he is expected to discuss trade and climate issues with his Chinese counterpart, Xi Jinping.

Afterwards, he will attend an Import Expo in Shanghai alongside incoming EU trade commissioner Phil Hogan and the Prime Ministers of Serbia and Greece.

Their presence is significant because Athens has already signed an agreement over the "Belt and Road Initiative" — Beijing's global plan to gain trade, influence and international standing in Asia and Europe.

Italy is already a member, and European leaders are worried that it may undermine trade among EU member states.

For Macron, this trip is all about trade, according to Euronews international correspondent Anelise Borges.

“The Élysée Palace in Paris has been insisting that the commercial dimension of this visit is really their priority and that’s why the French President is travelling with 50 business leaders from France, including the heads of like Loreal, Airbus and also the pharmaceutical giant Sanofi," she said.

Macron is also expected to continue advocating on behalf of French farmers, Borges notes. “Macron was the one who managed to negotiate the end of a 17-year boycott of French beef in China in his first state visit last year.”

She adds: "This will be the third time the French president and his Chinese counterpart meet so far this year, signalling a straight and close relationship between the two leaders.”