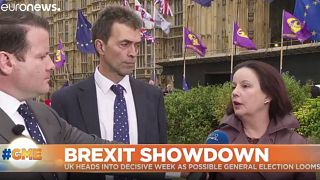 It's make or break week for the UK, as the country's parliament sits for the first time after the summer break with the date set for Brexit looming ever closer.

Prime Minister Boris Johnson is now demanding rebels on his own party to support him on the issue. Johnson, gave a speech yesterday amid a full-blown demonstration on the gates of Downing Street which can be heard on the background, warning that he will not ask for an extension to Brexit, in any circumstances:

Jeremy Corbyn, leader of the UK Labour party, has in turn given his view on Boris Johnson’s Brexit, making clear he opposes a trade deal with the United States under Donald Trump:

"What Boris Johnson was doing was essentially threatening people. Threatening people with a no-deal Brexit, if he doesn't get his way in parliament. Our purpose is to challenge this government on a no-deal Brexit, our purpose is to try to protect jobs and living standards. To try and ensure that this country doesn't run headlong into the arms of Donald Trump and a trade deal with the United States."

Euronews’s Tadhg Enright reports from Westminster and questions if a general election was to take place in the UK in the next few weeks, Boris Johnson could potentially turn out to be the shortest-ever British prime minister in history.

Liberal Democrat MP Tom Brake says Boris Johnson is “setting a trap, running down the clock for another 5 weeks… to crash us out of the EU without a deal, something he has no (public) mandate for.”

Cornelia Meyer, an international economist based in the UK says: “I think Brussels is looking at all of this with bewilderment, we as a country are looking like total fools.”

Watch Good Morning Europe’s report from Westminster in the player above.