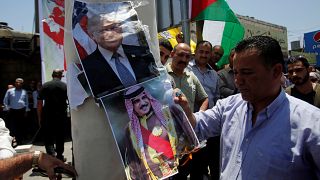 In an interview with Euronews, Husam Zomlot Head of Palestinian Mission to the UK, and formerly ambassador to Washington, has blasted Jared Kushner's so called Prosperity to Peace plan set to be unveiled today an a special conference in Bahrain.

Zomlot told Euronews "Palestine is not for sale," adding that "we don’t need Kushner to meddle between us and the Arab world”.

The diplomat was expelled from the US where he headed up the Palestinian mission. The PLO office was close, his visa was cancelled, and a few months later the US cancelled funding for UNRWA - the refugee agency for Palestinians, in a radical overhaul of US policy on the Israeli-Palestinian conflict.

Zomlot dismissed talk of new ideas being brought to the debate. “There is nothing new in this, Oslo was all about staring with the economic arrangements, the economic development… but at least Oslo had a political framework”.

Responding to the potential economic investment - a figure of some 50 billion US dollars was touted by The White House this weekend - Zomlot said it was not investment that was required.

“To unleash our economy we just need to do one thing: end this occupation – the Israeli military occupation”.

READ MORE: What was the Oslo Accord?