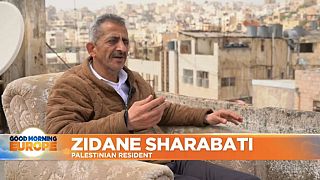 Hebron: a city divided between Palestinians and Israeli settlers

Hebron is the only Palestinian city where Israeli settlements and enclaves are inside the city itself. High up on the mountains of the West Bank, it has been split in two since 1997. There 80% is under Palestinian control and the remaining 20% - also called H2 - is administered by Israel. Around 40,000 Palestinians live in H2 among 800 Israeli settlers. The proximity between the two communities creates daily frictions.

Achiya Schatz, from Breaking The Silence Palestinian group says: "This is like the fifth avenue of Hebron used to be. And the truth is, it’s all empty. Why? Security reasons. We sterilise the territory so settlers can continue. So settlers invade places they're not allowed to be. And then the army comes and secures them."

Another Palestinian resident told us Israel has been tightening its grip in H2 to force them out. He says settlers’ attacks and the army's random night incursions are particularly hard on children.

Zidane Sharabati is another Palestinian resident and his concern is with the children in the area: “We have children aged 10, 11, 12 who still wet their beds at night because of what they see, dead people, attacks against them, also inside their school. And what happens at night with the army.”

Aid Zone’s report will air on the 30th May on Euronews. Watch Monica Pinna’s interview on Good Morning Europe in the player above.