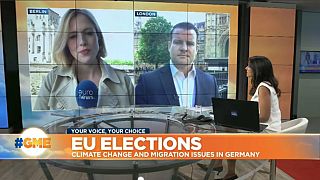 How are voters in UK and Germany reacting to upcoming EU elections?

Our correspondents Jessica Saltz in Berlin and Tadhg Enright in London explain how voters in Germany and in the UK are reacting to the upcoming EU elections.

Climate change has gone straight to the top of the list of German voters' concerns, especially with some of the younger ones who have been actively campaigning on a weekly basis for actions to be taken by politicians on the issue. This might benefit the Green Party rather than the ruling parties in Germany.

Migration is another topic which has reshaped the political scene there since the last EU elections in 2014. The AfD party has been campaigning on an anti-migration ticket since Angela Merkel's open door policy back in 2015.

In the UK the main topic has been, undoubtedly, Brexit. Voters have now the choice between pro and anti-Brexit parties, with Nigel Farage's new Brexit Party making considerable gains in the opinion polls. But the upcoming EU election might confirm a trend started in the UK local elections earlier this month, when the Liberal Democrats, which is a party campaigning for Brexit to be cancelled, gained considerable support from voters around the country.

Watch Euronews's Jessica Saltz and Tadhg Enright's full report in the player above.