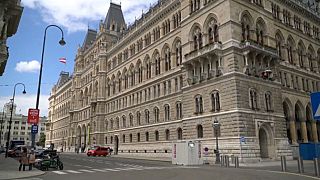 Euronews is on a road trip to feel Europe's pulse ahead of elections later in May. Our correspondents Vincent McAviney and Leszek Kablak pick up the baton in Vienna, Austria.

Our correspondent Vincent McAviney lands in Vienna and is joined by Leszek Kablak to take over Europe road trip.

Together they will visit Austria, the Czech Republic, Poland and finally Germany in the next few days.

They are inviting local people to sit on our red sofa to share their experiences and wishes before the EU elections, which start on May 23.

As Damon Embling and Gabor Tanacs pass over the baton, they talk about what people in Romania and Hungary have been telling them in recent days. It includes what they expect from the politicians they will soon be electing to the European Parliament and the problems they face in their everyday lives.

They also visited the farmland between Hungary and Serbia which was a major route for refugees coming into the EU back in 2015.

Since then the government of Viktor Orban has erected an imposing, hi-tech fence to stop the flow of immigrants coming through the Balkans.

To find out what local people think in the next countries being visited, follow our special series Road Trip Europe, which started in Portugal and has crossed nine countries so far, hearing the concerns and messages from voters and what they would like the EU to do next.

Watch Vincent McAviney's first report from Austria in the video player above.