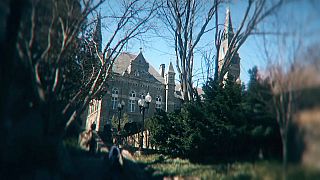 Fake photos, fake test scores and million dollar bribes: US federal prosecutors have charged 50 people in what they say is the largest case of college admissions fraud in the country's history.

Two popular TV actresses, Lori Loughlin (from the show "Full House") and Felicity Huffman (from "Desperate Housewives") were among those arrested for giving unfair advantages to their children so that they would be fast-tracked into some of the US's top universities, including Yale and Stanford.

The FBI says the students were unwittingly admitted by the colleges with inflated test scores or fake athletic records paid for by their parents.

At the centre of the scam is William Singer, who ran a college prep business. He has admitted he was paid a total of 25 million dollars to get students admitted as athletes - many having never played the sport.

He photoshopped the faces of teens onto the pictures of actual athletes. He then bribed coaches at the schools who arranged for the applicants to be admitted.