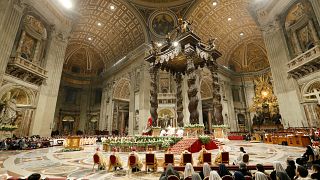 An extraordinary summit on the issue of child sexual abuse within the Catholic Church opens at the Vatican on Thursday, with survivors calling for zero tolerance.

Bishops from around the world have gathered for the four-day conference, along with Vatican officials, experts and heads of male and female religious orders.

The theme of the meeting is the "prevention of abuse of minors and vulnerable adults", and it comes as the 1.3 billion-member Catholic Church tries to eliminate a problem that has plagued it for decades.

Church leaders have repeatedly come under fire for their handling of the crisis - often moving priests accused of abuse from parish to parish, instead of turning them over to secular authorities.

Pope Francis called the meeting in September 2018, at the suggestion of his closest advisors, saying that he hopes it will be "catechesis", meaning attendees will learn something from it.

Watch our interview with Zenit's Vatican correspondent Deborah Lubov in the video player above.