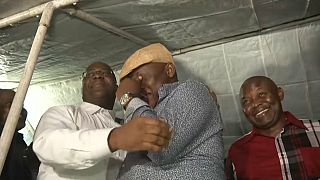 Opposition leader Félix Tshisekedi is the surprise winner of the presidential election in the Democratic Republic of Congo.

This result sets the stage for the country's first democratic transfer of power.

But the result is being disputed by the runner-up, Martin Fayulu.

Election observers reported a number of irregularities during the vote and the opposition alleged it was marred by fraud.

The result could lead to the vast country's first democratic transfer of power since independence from Belgium in 1960, with Kabila due to leave office this month after 18 years in power - and two years after the official end of his mandate.

Belgian Foreign Minister Didier Reynders cast doubt on the results on Thursday saying Belgium would use its temporary seat on the UN Security Council to seek clarification about Tshisekedi's surprise victory.