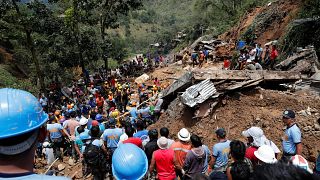 It's being called the "King of Storms"- and at least so far this year, it is. What started out as a Super Typhoon and is now tropical storm Mangkhut is the strongest storm in the world this year. The human cost is at 69 deaths so far but that is expected to rise- and the other costs keep piling up. Towns are flooded, buildings destroyed and crops are ruined throughout the country.

Authorities and aid agencies are both trying to take stock of the damage to begin recovery efforts. Philippines country director for OXFAM Lot Felisco spoke to Good Morning Europe on Monday.

"We have had teams of staff and partners onsite in the provinces of Guguyan and also monitoring the provinces in the Cordellera administrative region," said Felisco. "And what we have been receiving as assessment reports have been really very very unfortunate news- of houses that have either been partially or really totally damaged, of rice fields, agricultural lands inundated by flood waters. Roads that are impassable, landslides that have caused destruction of houses, and also rising death tolls. And this is just the tip of the iceberg, we feel. Because reports are only still starting to come in, we will see later in the week we will get more news from areas that have been previously inaccessible. So I'm afraid that the death toll might still increase and also that needs will be more massive than we had hoped for."

In the Itogon municipality rescuers are racing to find miners trapped in the mud after the typhoon caused two landslides in the area. Rescuers are using shovels to dig, as the ground is too unstable to bring in heavy equipment. The rain and ground conditions meant the operation was suspended overnight and restarted this morning. The forensics team leader on the ground, Rodrigo Real, said they will be working to identify bodies they might pull from the rubble.

"Because this is a mass fatality involving probably more than 70 casualties, our task is to establish identity of the victims because some of the victims are already decomposed," he said.

Lot Felisco said that OXFAM will be looking to help those who have been worst effected by the disaster.

"At the moment, we want to be able to respond to the immediate basic needs of families that have been afftected, been displaced, those who have lost their homes," she said.

"So we are now as we speak transporting provisions of water kits and also shelter repair material to provinces in Cagayan. We are also looking at how we can support families who have already lost incomes of many weeks- because the fishers for instance in Cagayan have been unable to fish for close to three weeks now- because even before Typhoon Mangkhut hit, there was another typhoon that was also affecting this area. So they have not been able to earn any income for close to a month and farmers who were hoping to harvest have lost all their crops, and therefore don't have any income. So we're also looking at how we can perhaps provide some cash transfers in those areas."

The typhoon, now downgraded to a tropical storm, has moved on to South China where it's already caused extensive damage and flooding. More than 2.4 million people have been evacuated from Guangdong province in anticipation- China's most populous province. Flooding is also a major concern there, and some places in Hong Kong are seeing waist high water in the streets.