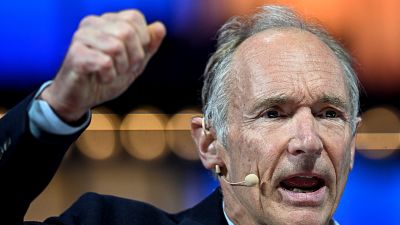 The creator of the World Wide Web is now on a mission to save it.

Sir Timothy Berners-Lee, the person who made it possible to read this online article, first came up with the concept of the Web back in 1989.

But 33 years later, he believes tech platforms “control the world and manipulate people by providing information”.

Speaking to Euronews Next at the Web Summit conference in Lisbon earlier this month, Berners-Lee said that “some people thought that tech people would save the world then. Now, we're in a situation where there are a lot of things wrong with the Web”.

His solution is “a mid-course correction to take it back,” which he calls Web3.0.

This is not the same as Web3, the name which has been waved around by many in the tech world as the next iteration of the Internet.

But before jumping to its future and its perils, it is important to know its origins and development.

How the World Wide Web began

Berners-Lee was born in 1955 in London and studied physics at the University of Oxford.

In the 1980s he started working as a consultant at the European Organisation for Nuclear Research (CERN), where he came up with the original WEB prototype, which he called “Enquire Within Upon Everything”. Its aim was to allow scientists to share data across systems.

But the Internet is not the same as the Web. The Internet already existed in the 1970s but no one really knew it was there.

Electrical engineers Bob Kahn and Vint Cerf first developed the Internet Protocol (IP), which allowed bits of information to be shared by computers. In a nutshell, it created a process by which computers were then able to speak to one another. This is the physical part that the Web can then plug into.

Berners-Lee then came along and wrote his proposal to develop a distributed single information system to meet the demand for automated information-sharing between scientists in universities and institutes around the world.

In 1990, he wrote a second proposal for the Web, which described the terms of a "hypertext project" called "WorldWideWeb" which allowed browsers to view "hypertext documents".

By the end of the year, his idea was up and running and he developed the code for his Web server on a computer.

To prevent it from being accidentally switched off, the computer bore a tag - handwritten and in red ink - which read: "This machine is a server. Do not power it down!!”

How the Internet took off

In 1993, CERN put the software for the World Wide Web in the public domain.

We then saw the emergence of the first stage of the Internet, Web1.0. Despite it being available to everyone, it was a read-only type of Web and only the few who knew the ins and outs of coding could publish anything.

This led to the development of Web2.0, which now allows us to interact more with the Web and become creators so we can publish what we like under big platforms such as Google, Facebook and so on.

But it does not come for free. In return, many of these companies can take our data which can be used for targeted advertising.

Berners-Lee’s idea for a new Web was born while working in his lab at the Massachusetts Institute of Technology (MIT), where he was trying to find a new way to break down the Internet and protect our data.

His solution to the dysfunctions of Web2.0 is the third layer of protocols, giving a person the ability to log into something with their own personal ID.

Some people thought that tech people would save the world then. <br><br>Now, we're in a situation where there are a lot of things wrong with the Web

He came up with a new project called Solid, and later a new company called Inrupt to help Solid launch.

Berners-Lee’s platform can be accessed from your browser. But it is not an app; he calls it a “Pod,” where you can store your private data and access it very easily.

In simpler terms, it can be thought of as your key or a digital ID that is kept secure.

He said this is his vision for Web3.0, emphasising that it is not Web3 which uses the Ethereum blockchain system and promises to be decentralised.

The issue with Web3 is that data such as health records can easily be traced; as it is public, making it secure is expensive. Speed is another issue and there are questions as to if it can be fully decentralised.

Many cryptocurrency and metaverse companies wave the word Web3 around as the future of the Internet. But Inrupt disagrees.

“We're talking Web 3.0 which is the real thing… not a marketing hijack if you like,” said John Bruce, CEO and co-founder of Inrupt, who joined Berners-Lee about five years ago.

“Tim explained to me over dinner one night that the Web as it's rolling out isn't the Web we imagined. But we could get it to a place as long as we bumped it in the right way,” he said.

“We've worked extensively with the open source community and so on. But we've, completed the picture of the technology jigsaw of what the Web should need”.

The technology is already available and Berners-Lee said Inrupt is speaking with governments - including those in Europe - without disclosing exactly which countries.

Is it available yet?

But it is already being rolled out in Flanders, the Flemish-speaking northern region of Belgium. Berners-Lee said social services will be delivered via the Pods and by the end of the year, its 6.5 million citizens will be able to use this technology.

Other users include the insurance industry as well as many other types of businesses.

But the technology aims to be accessible to everyone and every country, and can also help save lives.

We're talking Web 3.0 which is the real thing… not a marketing hijack if you like.

Inrupt has worked with NGOs to help refugees by allowing them to share their Pod. They can then share their medical data, the clothes and tents they’ve been given, and register with the NGO, which saves time.

Berners-Lee said other countries have asked for his help for victims of domestic violence and Inrupt gave pods to those affected.

“I heard when somebody goes to the police that it's typically on average after the 37th time they've been hurt,” he said.

“And so it's a sense that if [a Pod] is given to a person, they can just track what goes on completely privately and if they need to go to the police, they have a trail”.

The Pods can help everyone in society keep their online data safe.

Society also seems ready for it, with many of us more protective about our data since revelations about Russian hackers interfering with the 2016 US election, widespread disinformation and the Facebook Cambridge Analytica scandal.

Everyone wins even Big Tech

But how would the large platforms react to losing access to our data which they sell to companies and advertisers to make a profit?

According to Bruce, everyone wins as citizens would control how much data they give away and companies would have a better understanding of user preferences.

Inrupt’s task now is to continue speaking to governments and businesses so more Pods are used across the world.

But even if it is used everywhere, there is much more that needs to be done to make the Web a safe space.

“The Web has always been accessible and it is really important it has sort of internationalisation. So making sure it works in lots of languages and for people with disabilities could be really important with solid apps [Pods],” he said.

He is also fearful about what shape the metaverse will take.

“There will be issues. If you're worried about being a feminist blogger on Twitter, then what's it going to be like in the virtual reality world?” said Berners-Lee.

“Obviously, there's going to have to be a lot of thought about how to build systems for places which are safe,” he said, demonstrating that the work to make the Web a more democratic and secure space is far from over.

Forget Web3. Is Web5 the future of the Internet?

From NFTs to the metaverse: The tech buzzwords to know from 2021

What is Web3 and why is Jack Dorsey attacking it?