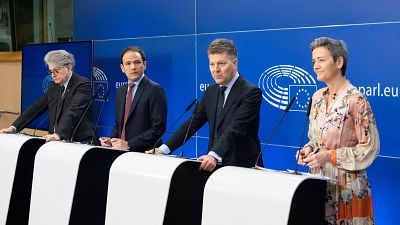 Landmark EU rules targeting the Big Five tech giants Google, Amazon, Apple, Meta and Microsoft are likely to set a global benchmark and may even force the tech giants to be more innovative, lawyers and experts said.

Europe's antitrust chief Margrethe Vestager on Thursday won backing from European Union members and EU lawmakers for her proposal, the Digital Markets Act (DMA), to rein in the powers of the tech giants using legislation for the first time rather than lengthy antitrust investigations.

Cédric O, the French Minister for the Digital Economy, on Thursday called the agreed legislation "the most important economic regulation in recent decades".

The DMA sets out a list of dos and don'ts targeting each tech giant's core business practices - and it could have international implications.

"DMA is here to stay and will be quickly mirrored in a number of countries. The flexibility that Big Tech had will be constrained, as the regulatory 'straitjacket' will get tighter globally," said Ioannis Kokkoris, competition law professor at Queen Mary University in London.

Why did the DMA come about?

The regulations, which are expected to come into force in January 2023, mark a change of philosophy in the fight against the abuses of large platforms.

Vestager's switch to legislation came amid frustration over slow-moving antitrust investigations that deliver remedies criticised by rivals as inadequate, with Google often cited as an example despite being hit with more than €8 billion in fines.

After years of vainly chasing the infringements of multinationals in endless legal proceedings, Brussels wants to act upstream, by imposing some twenty rules to be respected on pain of dissuasive fines. The aim is to act quickly and effectively, before abusive behaviour has destroyed competition.

The text targets only the largest platforms: GAFAM, as the Big Five are known, and perhaps a handful of other groups such as the online booking company Booking or the social network TikTok.

The list is yet to be defined according to already established criteria of turnover, market capitalisation, and number of users.

What is in the legislation?

The legislation establishes Commission oversight of all takeovers of these giants, regardless of the size of the target, to limit the capture of innovation from start-ups and avoid takeovers aimed solely at killing a competitor.

In all, it sets out some twenty rules to curb the abuses seen in recent years.

For example, large platforms will be banned from showing favouritism towards their own services in search engine results, as Google has been accused of doing with its online shopping site Google Shopping.

The new law will prevent these giants from using the data generated on their site by business customers to better compete with them, as Amazon has been accused of doing.

While we support many of the DMA's ambitions on consumer choice and interoperability, we remain concerned about the potential risks to innovation and the variety of choices available to Europeans.

The text, which was one of the main priorities of the French presidency of the EU Council, will also better protect users by making it compulsory for them to give their consent to the cross-referencing of data from several online services for the purpose of advertising profiling.

It will prevent the imposition of pre-installed software on computers or phones, such as browsers or music applications, and facilitate the use of alternative products.

In the home stretch, the European Parliament also secured the addition of interoperability of messaging services, which will allow, for example, a Signal user to communicate with a contact using WhatsApp (Meta).

Fines of up to 10 per cent of global sales are foreseen for infringements and even 20 per cent for repeat offenders.

The EU is putting in place "immediately applicable obligations, short and strict deadlines (for correcting any faults) and dissuasive sanctions", said Internal Market Commissioner Thierry Breton, who presented the plan in December 2020 with his competition counterpart Vestager.

What has been the reaction so far?

In a statement to the AFP, Apple said it was "concerned" by "certain provisions [which] will create unnecessary privacy and security vulnerabilities for our users, while others will prohibit us from charging for the intellectual property in which we invest heavily".

A free choice of software application shops will be introduced, including bypassing Apple's App Store, which has long been in the Commission's sights.

"While we support many of the DMA's ambitions on consumer choice and interoperability, we remain concerned about the potential risks to innovation and the variety of choices available to Europeans," a Google spokesperson told AFP, saying it would study the final text and cooperate with regulators on its implementation.

What is the potential impact of the DMA?

While Big Tech has cited concerns about the potential impact on innovation, the new rules have the potential to spur more innovation contrary to the tech giants' worries, according to Nicolas Petit, professor of competition law at the European University Institute in Florence.

It might even boost some companies' business models, he said.

New rules of the road for the digital economy will be shaped over the period ahead, and the DMA is a crucially important first step.

"I think the DMA indirectly places a premium on business models based on subscriptions or device level monetisation. We might see more (increased) prices, and vertical integration into hardware in the future," Petit said.

Still, enforcing the DMA will require a bigger team than the small group planned by the European Commission, said Thomas Vinje, a partner at law firm Clifford Chance in Brussels who has advised rivals in cases against Microsoft, Google and Apple.

"The Commission suggested upon proposing the DMA that it would be enforced by a team of 80 people. This will not be enough to enable effective enforcement," he said.

The DMA is just the first step towards making sure that tech giants play fair, said Alec Burnside, a partner at law firm Dechert in Brussels.

"The DMA is not a perfectly formed panacea from the start, and without doubt, gatekeepers will try to navigate around it. Rome was not built in a day, nor was the highway code perfect when first conceived," he said.

"New rules of the road for the digital economy will be shaped over the period ahead, and the DMA is a crucially important first step".

This will impact your life