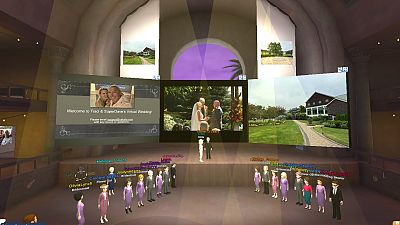 Traci and Dave Gagnon first met in the virtual world almost seven years ago, fell in love in real life and married in the metaverse in September last year.

The couple had a real-life wedding at a country club in New Hampshire in the United States, where they live, but simultaneously had avatars walk down the aisle in an online ceremony staged by Virbela, a company that builds virtual environments.

“We all felt instinctively like we were part of something new and something different, and that in some ways maybe the world really did change on that day because it opens our eyes to what's possible,” Traci told Euronews Next.

Companies have been racing to develop the latest technology to build the metaverse, a virtual and augmented reality world that we do not quite understand yet and is not yet fully formed.

How the technology may be used for events and ceremonies such as weddings is uncharted territory.

Since the COVID-19 pandemic, many couples have used technology such as Zoom to allow guests to be virtually present at weddings when they could not be. For Traci and Dave, the metaverse experience allowed them to go a step further.

The advantage with this technology is that it is focussed on bringing people together. And if there's one thing that we need right now, it's to feel connected to each other.

“One of my dearest friends in the entire world, his name is Tom Booth. And being a little older, he was concerned about travelling and being around groups of people and all that stuff. And so he had originally told me, I'm not going be able to come to the wedding if I'm concerned about my health and my wife's health,” Dave said.

“He was very broken up about that and I told them about the metaverse. And he asked, ‘will I still be able to give the toast?’”.

Dave told his friend he could deliver the speech in the virtual world; they ended up live streaming his toast into the real-life ceremony.

“Everyone there could hear the very kind of sweet words that he shared,” Dave said.

The couple had experienced the virtual world even before the metaverse became a buzzword as they both work as agents for eXP Reality, a real-estate brokerage that owns Virbela and has long embraced working in virtual reality.

It was actually their boss who suggested they share their nuptials in the metaverse.

They already had avatars of themselves made. “I had somebody say that I looked like Dolly Parton and a bunch of people say that Dave looks like Jeff Bezos. So those are pretty good compliments,” said Traci.

Other guests had a lot of fun designing their own avatars, especially the seven-year-old twin avatars who were their ring bearer and flower girl, and took their time enjoying the virtual world.

“I thought people would come in for the wedding ceremony, you know for 20- 30 minutes. But people came for the wedding and they stayed and danced with their avatars for the reception,” said Traci.

“We had people that stayed the entire reception because they were hearing the same music and stuff like that and dancing and they were there for the cutting of the cake, but they couldn't get to eat any cake unless they had some in the refrigerator”.

The Gagnons kept their metaverse ceremony simple and made it resemble their real-life ceremony. But other couples are being more creative.

In India, a couple will hold the country’s first wedding in virtual reality on February 6. Janaganandhini Ramaswamy and Dinesh SP have decided on a Harry Potter theme.

One of the main reasons the couple said they wanted to hold the virtual event is so that those who can’t be there in the real-life ceremony can attend in another way. But they have gone a step further and have decided to have a virtual avatar of the bride to be’s late father.

Like the Gagnons, the couple will also hold a ceremony in real-life because marriage in the metaverse has no legal clout, at least for now.

"Marrying in the metaverse is definitely legal in the real world, in the sense that it is not illegal. As for being legally binding – not so much,” John Cassels, a partner and Co-Head of the Regulatory Group at European law firm Fieldfisher, told Euronews Next.

He said just because a metaverse marriage is not legally binding in the real world, it does not mean that there will not be any legal issues, adding questions are already arising about behaviours in the metaverse and whether they might be actionable in the real world.

While no a metaverse marriage is not a binding marriage under current definitions, that doesn't mean to say that this will forever be the case.

Similarly, he said were a couple to invest in metaverse assets together, virtual real estate or similar, that would too be something the courts could entertain, alongside things like fraud perpetrated through the channel that ultimately impacts real-world money.

He also noted we are already seeing interesting intersections between new tech and established law and pointed to NFT “rug pull” scams being a prominent example.

"Safe to say, with the momentum the metaverse has been gathering it is set to become a significant digital channel. And, as the extent of the role it will play becomes clearer over time, there may well come a stage where the law is updated to evolve alongside virtual life,” Cassels said.

“So, while no a metaverse marriage is not a binding marriage under current definitions, that doesn't mean to say that this will forever be the case".

Can the metaverse replace intimacy?

Besides the legal questions arising over metaverse marriages, there are also concerns that virtual relationships could replace real-life ones.

The Gagnons say the virtual world is no substitute but say it can help with connections.

“The metaverse will never replace the intimacy of being with the sweet, beautiful and kind soul that you want to spend your life with,” Dave said, adding he thinks courtship still needs to happen in real life.

“The technology is always evolving,” Traci chimed in.

“But the advantage with this technology is that it is focussed on bringing people together. And if there's one thing that we need right now, it's to feel connected to each other”.