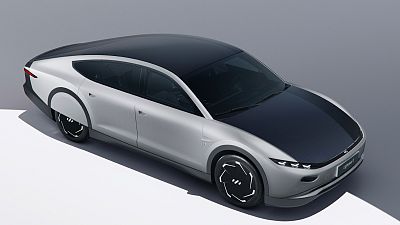 The Dutch startup Lightyear's futuristic solar-powered car, with its five square metres of solar panels on the roof and bonnet and space-age aerodynamic sleekness, can cover 70 km powered solely from the sun - if the weather is good, that is.

"It shows that it is possible, it serves as a technology demonstrator. But our goal is to be able to reach a mass market in three years, with a car at €30,000," said Lex Hoefsloot, the CEO of Lightyear.

The company says its "holistic" design allows the car to drive for weeks, even months, without needing to plug into a socket to recharge, as its solar panels top up its electric battery while it drives or remains parked outside.

In Navarre in northern Spain where it's been tested, the sun is generous with its rays, but the obvious question remains: What happens when it gets cloudy?

That's where the battery comes in.

"You can use the sun whenever the weather is nice to charge the battery. So the downside of power solar actually isn't that bad when you have a battery with the car," says Professor Gregory F. Nemet of the University of Wisconsin.

Lightyear says that in cloudy climates, based on an average daily commute of around 35 km, its car can go for up to two months before it needs to plug in for a charge.

In sunnier countries, that could be up to seven months.

"And for Lightyear 0, range doesn’t start and finish with plugs and sockets. The sun is its source," the company says in its presentation of the model.

Whilst it may seem an unlikely mass-produced alternative to CO2 emitting vehicles, petrol and diesel manufacturers might have no option but to be innovative.

A recent European Parliament decision paved the way for banning sales of new vehicles with combustible engines, voting to make the production of diesel and petrol cars a thing of the past in the bloc starting in 2035.

EV for the masses? This electric ‘car-bike’ aims to shake things up