Cyprus has been split on ethnic lines since 1974, when Turkish troops invaded the north of the island in response to a short-lived coup by Greek Cypriot militants seeking union with Greece.

In recent months Greek and Turkish Cypriots have been negotiating to try to end their decades-long conflict and have asked the United Nations to prepare for a new peace conference in early March.

A UN envoy is now urging both sides to seize an opportunity for peace, warning it could be years before such a chance arises again.

Euronews Insiders visited the divided island to speak with Cypriot people on both sides of the divide.

Euronews correspondent Hans von der Brelie began at an orchard in Morphou, a town in the northern part of Cyprus, where there are orange trees as far as the eye can see.

People living in the north generally speak Turkish. In the south they speak Greek.

Ramadan Kandulu, the Turkish Cypriot owner of the orchard told Euronews that he is not worried about the island’s divisions.

In 1974, fighting pushed Greek Cypriots from Morphou to the south. Turkish Cypriots fled to the north. The conflict displaced tens of thousands of Cypriots including the Kandulu family. The abandoned houses were distributed through a kind of lottery system.

The Kandulus – like thousands of other Turkish Cypriot families in the Morphou region – now live in a house that until 1974 was home to a Greek Cypriot family. And they want to stay.

Two-thirds of Turkish Cypriots backed a plan for reunification in a 2004 referendum, however the Kandulus oppose a united Cyprus.

“We are the Turkish,” Ali Kandulu, Ramadan’s son, told Euronews. “They are the Greek: different religion, different language, everything is different. Now I would like to ask you the question: Have you ever heard some problems after 1974 that the people killed each other? Like Syria or other countries? No! The biggest reason [for this peace] is that: [the presence of the] Turkish army.”

Michael Georgiades, a Greek Cypriot, said the presence of 30,000 Turkish soldiers in the north is “unacceptable.” His family fled Morphou when he was 18. He wants the property back.

Checkpoints opened in 2003 allowing access between the two sides through a UN-patrolled buffer zone.

That allows Michael to visit the places where he grew up.

“I went back to the first floor and I found the church bells… lying down… and I found also most of the furniture of the church, destroyed, there…” 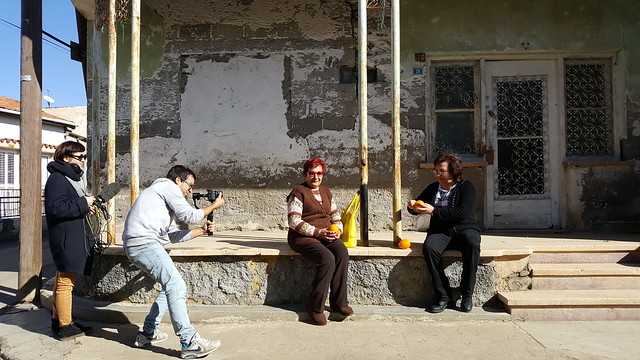 Euronews Insiders visited the far south of Cyprus, and the city of Limassol. Elena and her mother are Greek Cypriots from Morphou. They live in a house that, until 1974, was home to a Turkish Cypriot family.

“This photo I got on my facebook wall which says: Morphou my town! I want my house! I want my town!,” Elena said. “Ah, and here is the photo when I was a little girl on my veranda in Morphou… and all this orange smell it is in my nose – because we grew up with this smell.”

In case of reunification, Elena, a Greek-Cypriot said she could accept a Turkish-Cypriot president: she says it is not about a Christian or Muslim name. The future leaders should serve the common good.

“The [future federal] government – as we hear – is going to including Greek Cypriots and Turkish Cypriots. For me we are all Cypriots. For me it is not important if the president is called Yannis or Nikos [Greek names] or Mustafa or Ahmed [Turkish names].

When asked if a federation would be a good solution, Georgiou said: “Yes, a federation is going to be a perfect solution.”

Next stop: Kiti, a small village in the south, and home to Greek-speaking Hatice and Turkish-speaking Larkos.

They say love transcends borders and languages. Hatice and Larkos are now married and have a baby son, Arion.

“We are Cypriot Cypriots, like my family: we are Cypriots. We are coming from the same origin,” explained Hatice Ardost.

“This is what I am getting really really upset about: when people they want to be Turkish or Greek,” said Hatice. “My father died by saying that he was Cypriot. And that is what we are.”

“We should forgive, not forget what happened. But is is a new time now: let us use this time to be together,” Larcos added.