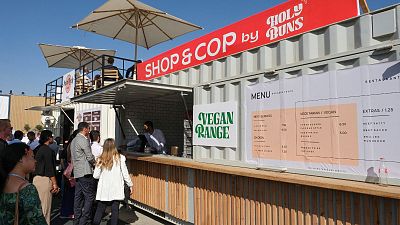 For farmers like Christine Nabwami from Uganda, there is no doubt about the damage that greenhouse gas emissions are wreaking on the world’s life support systems.

A chairperson of the Eastern and Southern Africa Small Scale Farmers Forum (ESAFF), the 42-year-old leader has watched droughts wither the cash crops - coffee, banana and maize - she needs to sell.

Adaptation is also a problem, she told Euronews Green at COP27’s Food Systems Pavilion. “In my culture, we had early warning systems. If it was going to rain, there were [natural signs] that would show us.”

Ants moving in a different direction, bats singing early in the morning, animals gathering materials “for their webs”, and wind patterns; all of these have significance in traditional Indigenous practice, Nabwami says.

“Now due to climate change and the destruction [of forested areas] they are being disrupted.”

Did the first ‘food COP’ deliver?

Nabwami was one of hundreds of participants at the UN summit in Sharm El-Sheikh looking to world leaders to tackle the world's multi-faceted food crises. Her message was a simple one.

“What I would love is for these heads of state to show the willingness to change the systems,” she said. After visiting her farm and realising how hard it is, “the finance would come automatically.”

COP27 concluded with a ‘disappointing’ swerve away from a systematic approach to the problems, environmental groups say.

Most reactions to the conference, which ended in overtime on Sunday, have focused on the historic creation of a new fund to support the victims of climate disaster. As well as the overriding failure to rein in fossil fuels.

But there were many fronts on which climate action was up for grabs, and agriculture is one of the biggest partially-grasped opportunities of the fortnight.

It also had its own set of adversaries. While more than 600 fossil fuel lobbyists attended COP27, a DeSmog investigation uncovered a steep increase in the number of delegates representing big agribusiness.

How was food discussed at COP27?

Given that COP27 took place on a continent where 20 per cent of the population face chronic hunger, according to the World Economic Forum, amid spiralling food prices and climate-driven drought, food was always going to be high on the agenda.

In the formal negotiations, it was primarily tackled via the ‘Koronivia Joint Work for Agriculture’ (KJWA): the dedicated (and only) UN workstream for tackling food and climate change together, founded in 2017. It makes agriculture the only sector with its own negotiations track at COPs.

But with the Koroniva’s expiration date dragged on from COP26, its future was looking highly uncertain.

At the end of week one, Carbon Brief reports, officials said that agriculture “took more meeting time than any other item at COP27.” The Koronivia Dialogue was making “sluggish”progress, a senior negotiator told Euronews Green halfway through the conference.

The negotiating draft that first emerged suggested that countries could broaden their scope to take a “whole of food system” approach to the problems. But this was erased from the final text.

Without approaching these challenges through a food systems lens, we are blunting our blade.

Food experts and campaigners were quick to express their disappointment.

“We can have 1.5C. We can nourish a population of 10 billion. We can secure resilient livelihoods and a just transition for farmers. But without approaching these challenges through a food systems lens, we are blunting our blade,” comments Morgan Gillespy, executive director of the Food and Land Use Coalition (FOLU).

What was agreed on food and agriculture at COP27?

Ultimately, the KJWA was extended by another four years, as countries agreed to keep working on the “implementation of climate action on agriculture and food security”.

They also decided to set up a ‘Sharm el-Sheikh online portal’ to share information on projects and policies to this end.

In a sign of how contentious food-related issues can be, Koronvia was reportedly the only agenda item that drew interventions from countries in the final global meeting, early on Sunday morning. Turkey asked for language around water insecurity to be amended, while Russia objected to any such changes, Carbon Brief reports.

This was in keeping with linguistic battles fought throughout the conference. India had previously objected to ‘climate action’ being in the title, preferring simply ‘action’. While the US apparently wanted references to a first workshop on food systems deleted.

But it was the possibility of a ‘food systems’ approach that proved most divisive.

Around 100 organisations, including FOLU, WWF and the Environmental Defense Fund, penned an open letter to negotiators asking for the term to be kept in.

Koronivia had six initial topics: soils; nutrient use; water; livestock; adaptation and its co-benefits; and the socio-economic and food security dimensions of climate change across agriculture. But the campaigners also wanted to see “a particular focus on sustainable food production, nutrition and dietary shifts, as well as food loss and waste.”

However, as IPCC expert Dr. Aditi Mukherji notes, “The term food systems has been meticulously avoided in Koronivia because of sensitivities around demand side measures such as diets by developed countries, and mitigation concerns by developing countries.”

Farmers vs big ag at COP27

Nabwami wanted world leaders at COP to listen to farmers and champion farmer-led policies, rather than push unaffordable and inaccessible technologies.

“We are represented by laptop farmers,” Nabwami said. “Practical farmers’ ideas are translated; by the time they reach policymakers, they are something else.”

This concern chimed with civil society reactions to agricultural announcements outside of the official COP process. The Agricultural Innovation Mission for Climate (AIM4C) initiative launched by the US and UAE at COP26 declared a $4 billion (€3.9 bn) investment boost in ‘climate-smart agriculture’ projects on 11 November.

As a previous DeSmog investigation revealed, it bore the fingerprints of big ag, including support for high-tech plans to lower the methane in cow burps.

“You’d get the impression from the AIM4Climate initiative that the real heroes feeding the world are tech bros in suits and lab coats generously scattering their brilliance onto the needy farmers of the world. It’s patronising, and it’s harmful,” commented Teresa Anderson, global lead on climate justice at ActionAid.

“The science is clear that to cool the planet and adapt to climate impacts, farming systems need to shift away from industrial agribusiness and towards techniques that work with nature.”

What next for food and agriculture?

As for Koronivia, Anderson believes that the final pact “points us in the right direction for agriculture.”

“It was actually one of the more inclusive, if not the most inclusive processes in the UNFCCC. With this, we might not be galloping but we’re tiptoeing in the right direction,” the seasoned campaigner told Carbon Brief. “It didn’t give big agriculture the space it was hoping for, but really emphasised the input of smallholder farms, the importance of food security and equity.”

And while “deeply disappointed” that a food systems approach did not stay the course of negotiations, global food practice leader at WWF Joao Campari concedes that “hope is not lost.”

The creation of a four-year joint work on agriculture and food security in Sharm El-Sheikh means there is still room to bring about a “truly holistic approach” he says.

Campaigners are now looking ahead to another COP - the Convention on Biological Diversity’s 15th conference in Montreal next month to deliver change.

“We can only halt and reverse nature loss at the scale required by applying food systems transformation alongside traditional conservation approaches,” Campari says.

“Given food drives 70 per cent of biodiversity loss on land and 50 percent in freshwater, it is imperative actions across food systems are included in an ambitious Global Biodiversity Framework.”