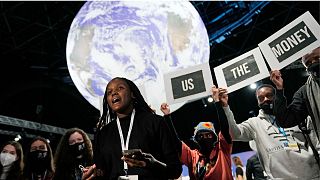 For the first time ever, children will have an official space at a UN climate change conference in Egypt next month.

It may be surprising given the way young activists like Vanessa Nakate and Greta Thunberg have lead the climate movement in recent years, but young people have not had a dedicated platform at a COP before now.

The newly-announced Children and Youth Pavilion at COP27 will enable them to hold discussions and policy briefings. It will be located in the ‘Blue Zone’ - the inner, UN-managed space which hosts the global negotiations.

A child born today would experience four times the extreme weather events than we do.

“A child born today would experience four times the extreme weather events than we do. This impact is unjust. Our world leaders must act immediately.”

Omrani adds that the Children and Youth Pavilion at COP27 will tackle this injustice by platforming young people.

“We will convene young experts and climate advocates globally to showcase the groundbreaking initiatives led by youth around the world, and accelerate and integrate our engagement in real climate policy discussions.”

The COP27 schedule revolves around multiple themed days over two weeks. ‘Youth and Future Generations Day’ on 10 November will be a particular focus for the pavilion organisers hailing from 14 youth-led organisations.

Why do children need a pavilion at COP27?

Young people remain understandably sceptical of climate conferences. They are routinely frustrated by politicians’ unfulfilled promises and the lack of urgent action required to tackle the climate emergency.

As Mitzi Jonelle Tan, activist and convenor of Youth Advocates for Climate Action Philippines, puts it: "Every year world leaders and the UN climate summit say that they're listening to the youth and most affected people yet we're still on the path of destruction…

This year the UN climate summit is being held in Africa. 70 per cent of the continent’s population is under the age of 30 and with several vulnerable communities living on the frontlines of the climate crisis. It makes the importance of listening to the voices of young people especially significant at COP27.

The Intergovernmental Panel on Climate Change (IPCC)’s latest report made it clear that we are now in extraordinarily dangerous territory. Those that will inherit this danger are the youth, children, and those yet to be born.

What do young people want from COP27?

Young people are expected to demand world leaders listen to and prioritise policies to protect those most affected by the climate crisis, especially Indigenous Peoples and those in the Global South.

“At COP26, pledges to provide loss and damage finance to developing nations were yet again disregarded at the hands of the world’s wealthiest and most polluting nations,” says Vanessa Nakate, UNICEF Goodwill Ambassador and climate activist.

“At COP27, young people will have a seat at the table. We will use that platform and our voices to demand climate finance for mitigation, adaptation and a separate fund for loss and damage.”

The Children and Youth Pavilion is organised entirely by youth lead entities and institutions supporting youth engagement and inclusion - including Fridays for Future and the Loss and Damage Youth Coalition.

Save the Children and UNICEF are among the pavilion’s other institutional partners.