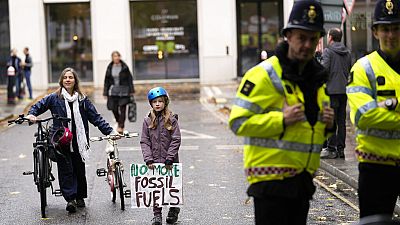 From protests to policy meetings, panels and public events, young people’s voices seem more prominent than ever on the global climate stage.

But behind the scenes, they feel that big companies and governments are using them to look good without really listening to what they have to say.

Generation Z stands the most to lose from the climate crisis, giving their words a greater urgency. Just like the phenomenon of ‘greenwashing’, big public gestures are now helping to cover up less than stellar environmental records, youth activists say.

And rather than directly being involved in official negotiations or valued for their unique perspective, many young experts believe they are instead being used simply as a box-ticking exercise.

Applause means nothing if there isn’t any action

Nowhere was the problem more evident than at COP26. For Dominika Lasota, a climate justice activist from Poland, the level of “youthwashing” at the conference was palpable.

“Young people are being invited to panels, being invited to give speeches, being applauded and praised and kind of upheld and brought up to the spotlight,” she told Euronews Green at the Glasgow conference.

Snapshots from social media saw prominent young people go from one event to the next with little rest. Some even had to cancel after the packed schedule left them exhausted. It was no secret that these voices were in high demand.

“But that applause that we gain means nothing if there isn't any action behind it,” Lasota added.

Being asked to speak at numerous events, dragged from panel to panel, Lasota’s experience echoes that of many others in Glasgow earlier this year. Despite being praised for their perspective on the climate crisis, many felt that those with the power to bring the change they were asking for didn’t really understand.

Youthwashing is just about having young people there for good PR and good marketing.

The Fridays for Future activist explained that is a phenomenon that has been around since the beginning of the youth climate movement. Young people are invited into these influential spaces to bring their vision and perspective but once they demand solutions, the door closes in their face.

“When you don't then change it means that you don't really treat our presence there seriously because if you would take us seriously, then you would listen to what we say.

“Youthwashing is just about having young people there for good PR and good marketing. But as with any marketing, it's just for your benefit and not actually for making things better.”

A seat at the negotiating table

Organisers promised the “most inclusive COP ever” but many young activists and environmental experts struggled to even get in. Instead of securing delegate badges through their own countries, a number told Euronews Green that they had had to go through NGOs to find a place at the conference.

Representatives from fossil fuel companies, however, outnumbered just about any other delegation according to Global Witness. That included those from the most climate-vulnerable nations and the official UN constituency for Indigenous peoples.

Even for those with a badge, most were realistically unable to observe any of the most important official sessions that took place as tickets for NGOs were limited. Notably, when Barack Obama delivered what was billed as a message for young people, very few of the people it was directed at were actually in the room to hear it.

“Today Pres. Obama is at Cop26, and apparently, he has a message for youth,” she wrote.

“But youth won’t be in the room. There’s no tix for most of us. Tix were limited to 2 per delegation or NGO, and the adults took them. There’s no video link either. Guess we’ll watch it later on YouTube.”

Today Pres. Obama is at #COP26, and apparently, he has a message for youth. But youth won't be in the room. There's no tix for most of us. Tix were limited to 2 per delegation or NGO, and the adults took them.
Theres no video link either.
Guess we'll watch it later on YouTube 🤷‍♀️

The young people who did manage to make it into official proceedings fought hard for a diverse and inclusive view of representation. Many still felt as though their insight was not being taken seriously.

“I do think that collectively, your voices are still not being heard and included enough in negotiations,” says Xuan Zihan from YOUNGO, the youth constituency of the UNFCCC.

Zihan is a co-lead for the Global Youth Statement, a paper made up of contributions of over 40,000 young people across more than 135 countries. The 77-page document demanding concrete change was delivered to world leaders and high-level guests at the Glasgow climate conference.

It is the voices of young people that are leading the way for more progressive change out in the climate landscape.

“First of all young people and the voices of young people are absolutely crucial in the negotiations,” he says, “because of climate justice. Because we are inheriting a world that we need to face and because of the disproportionate impacts that young people face from the climate crisis.”

With the Global Youth Statement, young people from all around the world are making a powerful and loud call to world leaders at #COP26@coy16glasgow and @IYCM, you were heard, loud and clear.
#TogetherForChangepic.twitter.com/WJOSyEnGVB

“We are calling for an intersectional approach to addressing the climate crisis. Taking into account the fact that different groups and especially marginalised groups have been affected disproportionately.”

Zihan adds that young people have so much to offer, not just in terms of the protests and campaigns they are spearheading, but also the innovative solutions they present as part of policy documents like the Global Youth Statement. The ambition they bring, he says, is vital.

“It is the voices of young people that are leading the way for more progressive change out in the climate landscape.”