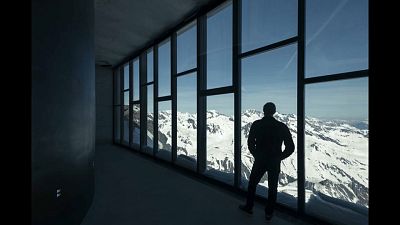 The Trevi Fountain in Rome, the Notting Hill Bookshop in London, the Old Royal Naval College in Greenwich, the Institut Lumière in Lyon, the Bergman Museum on the island of Faro and the Odessa Stairs...

In total, 35 museums, monuments, but also places and landscapes have been identified by the European Film Academy as belonging to European cinematographic memory.

Euronews spoke to the director of the European Film Academy, Matthijs Wouter Knoll.

“The European Film Academy decided to honour these places and give them a special status, as is the case in many countries when talking about heritage,” explains Wouter Knol.

“We had to do the same for European film history, one of the oldest (film) histories in the world. People are very interested in the classics, and showing them, showing the places where they were made, where people have memories of them. It is an important part of the work we can do - to broaden the audience interested in cinema in Europe.”

The list of "Treasures of European Film Culture" is growing every year...

Among the 35 current sites is Babelsberg Studio.

Founded in 1912, it still one of the most attractive in the world for big productions, and, of course, the cradle of German cinema.

Located in Potsdam-Babelsberg outside Berlin, it is the second oldest large-scale film studio in the world (only preceded by the Danish Nordisk Film), and Europe’s largest film studio.

Among the movies filmed there are classics like Robert Wiene’s The Cabinet of Dr. Caligari and Fritz Lang's Metropolis.

In Andalusia, the Plaza de España in Seville has just been listed as having been used as a set for various masterpieces - from Lawrence of Arabia to Star Wars.

Finally, the Sète beaches in the south of France were the setting for more than a hundred films, including those of the unforgettable and much-missed Agnès Varda, who was one of the greatest ambassadors of Sète... and of cinema.