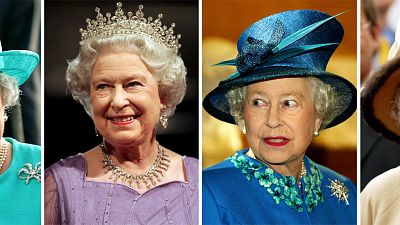 The Queen's style has evolved through the ages - how did we get to the instantly recognisable look we know today?   -   Copyright  SCHULZ KAPPELER BAUER CARSTENS   -
By Tim Gallagher  •  Updated: 20/09/2022

When we close our eyes and think of Queen Elizabeth II what do we see?

Monochrome colours, a sensible pair of block shoes, the Launer handbag and probably a hat.

Was this instantly recognisable look crafted by design?

“Her image is cemented into our brains,” says newspaper columnist and royal fashion expert Miranda Holder.

“We think of this dear lady who had the same shampoo and set ever since we’ve known her."

“She wears those to be easily seen and identified. It's all about creating a personal brand, and she is a brand. It’s brand Queen.”

The Queen enjoyed a 70-year reign and had plenty of time to build an image that will last forever in photographs and the nation’s psyche. But how did we get here?

The Queen’s fashion through the ages

In the public eye from a young age, as a princess the Queen wore the usual demure, classic attire which was worn by royal children.

Arguably her first big fashion ‘moment’ was in 1947 when she was married in a dress designed by Norman Hartnell, who allegedly wanted it to be "the most beautiful dress he’d ever made."

At the time, two-years after the end of World War II, textile rationing loomed large and the young princess was saving up her ration coupons to buy the fabric, eventually receiving 200 more after a vote in parliament. When the dress was made, the Queen even insisted that all the emblems of the commonwealth be sewn into it, using Hartnell’s signature embroidery.

“That was the birth of the Queen as the ultimate diplomatic dresser,” says Holder.

In the 1950s, with fabric rationing over, the Queen embraced the small-waisted, large-skirted Christian Dior post-war silhouette that defined an era.

In the 1960s, the Queen, while unable to fully embrace the sexual and fashion revolution of the time, managed to shorten her hemlines a touch. But it wasn’t until the 1970s, and the proliferation of colour photography in the press, that she really hit her stride.

The Queen took her diplomacy-through-fashion to every continent. Nicknamed the ‘million mile Queen’, she and husband Prince Philip went on rigorous tours of the commonwealth, where she was able to impress nations by wearing their flag colours and emblems - even modelling a maple leaf brooch in Canada.

The 1980s represented a lull, and a period where she was often unfairly contrasted with the glamorous Princess Diana. However, the introduction of a new stylist, Andrea Kelly, revamped the Queen's look and brought the style we all recognise today.

“She saw it as her role to give the Queen’s image a bit of a revamp - more modern, sleeker, more youthful and more vibrant,” says Holder.

“It was masterfully executed.”

The Queen’s look has been carefully crafted and her status as a country-girl–turned-unlikely-style-icon is well earned.

To this day, there is a huge appetite for Launer handbags in the Middle East and who knows how many Barbour jackets the Queen has inadvertently sold.

During her life, she has influenced the fashion industry in some unexpected ways, with designers from Alexander McQueen to Vivienne Westwood incorporating her iconography into their collections.

A more on-the-nose demonstration of the durable influence the Queen’s style has had comes in the form of young British designer Richard Quinn.

In 2018, Quinn was awarded the Queen Elizabeth II Award for British Design at London Fashion Week. He was even presented the award by the Queen herself.

Warned ahead of time, Quinn added a few “Queeny touches” to the collection, sending an excess of floral prints down the runway, with his characteristically masked models adorned with silk headscarves.

The Queen sat in the front row, next to Anna Wintour.

“The world of fashion and design is circular. What happens is the designers absorb what’s going on in the world around them and that informs their next season collection. Whenever there’s a coronation or a jubilee that cannot help but inform what designers then create."

“Opera gloves are back in fashion and I don’t think it’s a coincidence between that and the platinum jubilee happening this year.”

A constant in British life

Throughout the years, the Queen’s fashion has remained a constant in British public life.

Her use of fashion-diplomacy endured throughout her reign, modelling a bright green dress as the first monarch to visit Ireland since its independence, and even - it was speculated - wearing a hat reminiscent of the EU flag after Brexit.

“Fashion is a language… The Queen was the first monarch to embrace and understand this,” says Holder.

Although the royal family can never be too on-trend to avoid looking dated in photographs (this is why Prince William’s children are always dressed in tartan shorts), the Queen managed to create a look which stood the test of time.

Her hats, handbags and colour coordination endured throughout all the difficult times of her reign.

“I think the Queen’s look has become a source of great comfort to the nation. During turbulent times… the Queen is a constant figure of stoicism.”

Was a new global audience record set for the Queen's funeral?