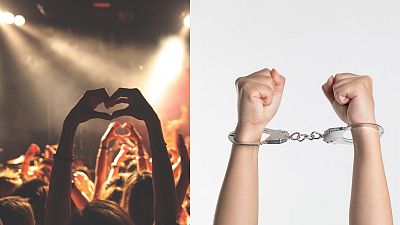 To many, Europe is a continent synonymous with freedom, where citizens can enjoy themselves in whatever way they please.

Times when fun and frolics were policed by the state are thought of as a thing of the past; with Oliver Cromwell banning Christmas and the strict merchant-era of Amsterdam feeling like distant memories.

But it seems that there are some residual laws, either hangovers from state overreach or bizarre initiatives from a bygone era, that seek to stop Europeans enjoying themselves.

Some of these rules are dusty, forgotten legislation, but others are still enforced today. So, join Euronews Culture as we take a look at some of the bizarre rules that could get you into trouble across Europe.

Sweden: Want to be a dancing queen? You’ll need a permit

ABBA may be known for their hit song ‘Dancing Queen’ but if you fancy a spontaneous boogie to it in a Swedish bar, you’d better beware.

There is a law in Sweden which prohibits spontaneous dancing in bars that don’t have a licence. The law (which punishes venue owners rather than any would-be movers and shakers) dates back to the 1930s, but its current iteration dates to the 1970s when it was brought in to prevent riots.

There have been attempts to repeal the law on many occasions, with 20 motions leading the Swedish parliament to abolish it between 2011 to 2014. In 2016, the Swedish parliament voted to scrap the law. However, the government has never implemented the change and, as recently as 2020, a business owner in Härjedalenwas was prosecuted.

Mary Poppins famously ends with Julie Andrews sneaking off as the Banks family and Dick van Dyke sing a chorus of ‘Let’s go fly a kite,’ but a more realistic ending might have been the entire family getting thrown in jail for flouting the law.

It turns out that flying a kite in public has been illegal in the UK since the 1800s, after being banned under the Metropolitan Police Act of 1839. The act specifies that fines will only be issued if the kite is used in a manner which annoys passersby, which could get practically anyone in trouble!

Kites are also essentially defined as aircraft, and are therefore subject to the rules of the Civil Aviation Authority. So make sure to remember not to fly your kite above 200-metres!

France: No tongues on the platform

The French are known for being notoriously romantic, and even have a kiss assigned to their nationality.

All the romance seems to get in the way of timekeeping though, as kissing is actually banned in French train stations to avoid delays.

In 1910, the forerunner to the SNCF (who run the French trains) was tired of the timetables being interfered with by public displays of affection, or PDAs. Thus, kissing on a train once it has entered the station or anywhere on the platform is not allowed.

We’re not sure how much this is enforced, but best to keep it to a chaste handshake just in case.

Finland: No aux cable in Ubers

“Can you turn the radio on please?”

The question most of us ask when we get in a taxi on the way to a night out, but in Finland it will cost you. Or rather, it'll cost the driver.

Finnish taxi drivers already battle seasons of near total darkness in winter and 23 hours a day of broad daylight in the summer, but since 2009 they’ve also had to pay a fee for playing music while their passengers are in the car.

In 2009, the Finnish supreme court ruled that playing music in a taxi constitutes a public performance and that drivers must pay a fixed-fee of roughly €22 to the Finnish Composer’s Copyright Society (Teosto).

Milan is known as the fashion capital of Italy, but it transpires that those moody models pouting their way down the runway at Milan Fashion Week are actually breaking the law.

It is against the law to look glum in Milan, where the compulsion to smile has been legislated for since the city was part of the Austro Hungarian Empire. Exceptions are made for mourners at funerals and those visiting a hospital, but otherwise you need to turn that frown upside down!

Of course, the law is no longer in effect, and we don’t know how widely it was enforced in public places in the past. However, rumour has it that the law was brought in to increase the city’s profile in a vast central European empire.