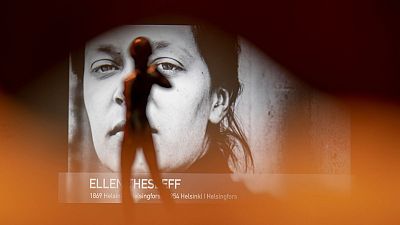 When picturing a Nordic woman the figure of Sanna Marin often comes to mind; Finland’s young prime minister has a pragmatic, down to earth style that reflects her country's consensus politics.

Consistently ranked highly for parity between the sexes, four of the top five countries in the World Economic Forum’s Gender Gap Report 2021 are Scandinavian, earning the region a deserved reputation for gender equality.

However, despite their high equality ranking in contemporary society, the role of women in shaping these northern European states is often overlooked, until now.

A new exhibition at the Finnish National Gallery, Ateneum, examines early 20th century female artists and their role in establishing Finland after independence from Russia in 1917.

“The country needed women to participate.”

Aided by funding and access to education, a group of largely upper-class women had travelled the salons and schools of Europe, and brought back experimental styles to the newly formed country.

Shying away from the dramatic Nordic landscapes which were typical of the male artists in the Finnish national art project, the women were able to embrace and highlight scenes and images of the modern woman.

Some of the exhibition shows early nudes painted by women after rules on life-modelling were changed in the 20th century; paintings which subvert the usual male gaze.

Many of the artists led what would have been considered ‘alternative’ lifestyles; working mothers, remaining unmarried, or choosing to be childless. This element of choice is important to the curators.

“They built their own images of themselves, followed their own strategies and made their own life choices. They were not victims, they forged their own path,” Utriainen adds.

A report by the European Parliament in 2021 titled ‘Women in art and culture - Artists, not Muses,’ highlighted the ongoing work to uncover the importance of female produced art which has remained hidden either by design or necessity.

Only 3 - 5 per cent of work in permanent art collections across Europe and the US is produced by women, with many female artists in history downgraded to hobbyists rather than professionals.

Excavative work is ongoing all over the world; the Venice Bienale is adopting a transhistorical approach to surrealist women, in the US there is a reexamination of the Jackson Pollock dominated abstract movement, and the masculine German expressionists are also subject to a reevaluation.

So it is with ‘The Modern Woman,’ where pioneering women like early sculptor Hilda Flodin and graphic artist Lea Ignatiu, often overlooked in favour of men, are given their rightful place.

“I think now there is a shift away from the old modernist paradigm which has been very male dominated,” says Utriainen.

“But it’s not just about Finnish women… it’s an international conversation.”

The irony present in the exhibition is that the outsider status of the women in 20th century Finland is what allowed them to be so experimental; free from the pressure placed on male artists by the establishment they were able to go their own way.

“Women had more restrictions in their daily lives but conversely more creative freedom when it came to their art,” says Utriainen.

However, it shouldn’t be understated that despite their freedom, these women still often go unobserved. Nor in the present day does the famous Finnish gender parity stretch to every part of the art world.

“There’s still a lot of work to be done,” says Sakari.

‘The Modern Woman’ is finding its home in Ateneum after a world tour which included stops in Tokyo, New York and several Baltic and Scandinavian nations.

In every place it visited the exhibit highlighted the culturally specific role of women and stimulated conversations on gender.

Poignantly ‘The Modern Woman’ opened in the US (where an early iteration was shown in New York’s Scandinavia House) at the time of Hillary Clinton’s electoral defeat to Donald Trump.

“It really felt like an opportune moment for us to be highlighting these issues,” says Utriainen.

Indeed, the culture war backlash in many states in Europe (and elsewhere) gives ‘The Modern Woman’ even more relevance.

Even in progressive Finland the far-right Finns party came second in the 2019 election with just over 17 per cent of the vote.

“In many countries around the world there are people that are trying to roll back hard-won rights for women – particularly reproductive rights,” says Utriainen

“It’s important to continue to give women opportunities and support.”

Likewise the significance of an exhibition celebrating female nation-builders in a formerly Russified country, which maintained strategic neutrality throughout the cold war, cannot be missed in the current geopolitical climate.

While the image of a Nordic woman today is likely to resemble Sanna Marin, the need to excavate strong role models from history is essential and it is part and parcel of the work at Ateneum.

It’s a mission which both Sakari and Utriainen take very seriously.

“I have become more staunch feminist during this process because I’ve seen there is so much more to be done and so many great female artists to be discovered,” says Utriainen.