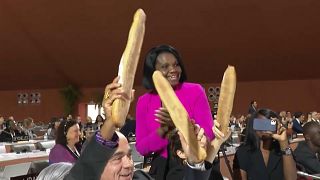 The humble baguette - the crunchy ambassador for French baking around the world - is being added to the UN’s list of intangible cultural heritage as a cherished tradition to be preserved by humanity.

The humble baguette - the crunchy ambassador for French baking around the world - is being added to the UN’s list of intangible cultural heritage as a cherished tradition to be preserved by humanity.

UNESCO experts gathering in Morocco this week decided that the French flute - made only of flour, water, salt, and yeast - deserved United Nations recognition, after France’s culture ministry warned of a “continuous decline” in the number of traditional bakeries.

The UN cultural agency’s chief Audrey Azoulay said the decision honoured more than just bread; it recognised the “savoir-faire of artisanal bakers” and “a daily ritual”.

“It is important that such craft knowledge and social practices can continue to exist in the future,” she said.

The agency defines intangible cultural heritage as “traditions or living expressions inherited from our ancestors and passed on to our descendants.”

With the bread’s new status, the French government said it planned to create an artisanal baguette day called the “Open Bakehouse Day”.