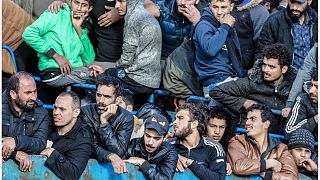 How small businesses in Ukraine have adapted to the war

A dilapidated fishing boat crammed with 500 people has been successfully towed to Palaiochora, a southeastern port on the Greek island of Crete.

A dilapidated fishing boat crammed with 500 people has been successfully towed to Palaiochora, a southeastern port on the Greek island of Crete.

The boat had lost its steering and had been drifting in the Mediterranean.

Greek authorities said they were asking the European Commission to relocate the migrants to other EU nations in solidarity with Greece but would provide immediate relief for the rescued passengers.

The rescue followed a major operation overnight by the coastguard after receiving a distress call from the boat during bad weather.

Shipping Minister Giannis Plakiotakis, who is in charge of the coastguard, described the rescue effort as the largest in the Mediterranean in recent years.

A Greek navy frigate, a tanker, two cargo ships, and two Italian fishing vessels participated but were unable to transfer passengers from the vessel due to extreme weather conditions.

There were no reports of any injuries or missing people.