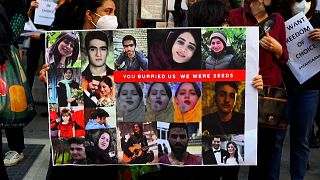 The protests follow the death of 22-year-old Mahsa Amini, who died while in the custody of Tehran's notorious morality police.

Iranian women have been trying to make their voices heard since 16 September, defying a crackdown that one rights group says has killed more than 75 people and drawn international condemnation.