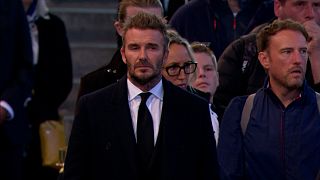 Football great David Beckham has joined the long queue of people waiting to pay their respects to the late Queen Elizabeth II, who is at rest.

The queue across London for people to pay their respects to the late Queen Elizabeth II was briefly halted on Friday due to the number of people wanting to get past the coffin.

A live queue tracker said the queue was "at capacity" and entry had been "interrupted" for six hours as the wait reached 14 hours and the queue stretched five miles from Parliament to Southwark Park in south London and around the park.