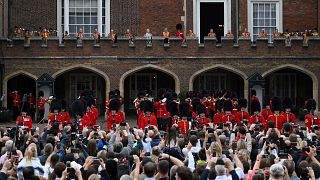 A royal official declared King Charles III the UK’s official monarch on Saturday during a pomp-filled ceremony - including royal guards and trumpets.

The proclamation of the accession of the King, which includes political symbolism and tradition, ended with the Garter King of Arms, David White, calling for a “hip, hip, hooray!” for the new monarch.