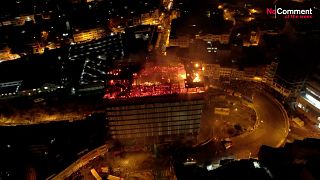 A massive fire engulfed part of the 13th floor of a new commercial building in La Paz on Monday.

Fire was also raging in San Domingo de Silos in Spain, where firefighters fought the remnants of a wildfire.

Screaming and water splashes - this is what the Armenian capital looked like during the water festival Vardavar last weekend.

Turkish football team Fenerbahçe also screamed and chanted "Vladimir Putin" after Dynamo Kyiv scored against them in their UCL qualifier on Wednesday.

The LEGOLAND Windsor Resort is supporting the England women's soccer team ahead of Sunday's UEFA final by building LEGO miniatures of the team: it t took two model makers and 874 pieces to reproduce the famous players.

And finally, we hope you will enjoy this weekend as much as the Amman Film Festival's jury.