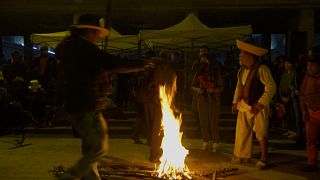 Indigenous protesters gather at university in Quito over night after protest

An Indigenous protester died Tuesday in clashes with law enforcement during a ninth day of demonstrations against the Ecuadorian government, which the military described as a "grave threat."

Since June 13, multiple roads have been barricaded nationwide at a cost of hundreds of millions of dollars to the economy, in demonstrations over fuel prices called by the powerful Confederation of Indigenous Nationalities of Ecuador (Conaie).