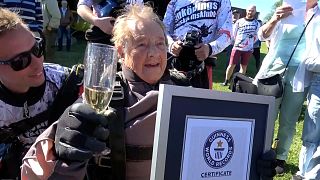 A judge from the Guinness Book of Records was present when Ruth Larsson became the oldest person in the history of the world to skydive on Sunday 29 May.

When Ruth Larsson was 90 years old, she wanted to learn more about flying and started trying things like paragliding, gliding and hot air ballooning.

In 2019, she made her first parachute jump at the age of 101. But there was no world record because a few months earlier, American Kathryn Hodges jumped, at 103 years and 129 days.

Today, Ruth Larsson has passed that age, and at 2 p.m. on Sunday she was ready to take the world record, at the same spot where she jumped three years ago, just outside Motala.

The first Swede to make a parachute jump was Axel Raoul Thörnblad in 1920, when Ruth Larsson was two years old.