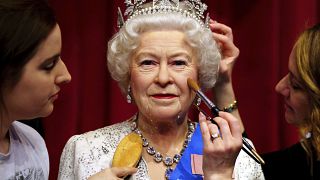 The U.K. royal family has reunited with Prince Harry and his wife Meghan - at least in wax.

Madame Tussauds has given the royal figures a makeover for the Queen's upcoming platinum jubilee, marking seventy years on the throne.

The figure of the Duchess of Cambridge, Kate Middleton, is dressed in an emerald Jenny Packham gown worn by the duchess twice to royal functions: a state visit to Pakistan in 2019 and The Royal Variety Show in 2021.

Meghan Markle's figure is dressed in the red, caped Safiyaa gown worn on one of her last royal engagements at the Mountbatten Festival of Music at Royal Albert Hall in London in March 2020.

The queen's figure is the 23rd of 24 created of the monarch by Madame Tussauds London throughout her seventy-year reign. The waxwork is dressed in a recreation of the white and silver lace dress worn in the official Diamond Jubilee portrait photography and covered in 53,000 Swarovski elements, with a blue silk sash and The Queen's Garter Badge. A replica of the diamond and pearl George IV State Diadem completes the look.

The royal figures are on show at Madame Tussauds for two weeks from 27 May as part of the attraction's platinum jubilee celebrations.

The Duke and Duchess of Sussex are returning to the U.K. to take part in the real-life celebrations.