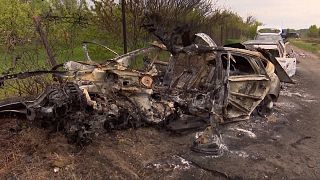 Convoy of civilians destroyed near Kharkiv

Kharkiv regional prosecutor's office said in a statement that at least four people were killed when a convoy of 15 cars tried to evacuate to Kharkiv near Staryi Saltiv village. The wreckage of the convoy was found on Friday.

One member of the Ukrainian military known by the nom de guerre "Spanish" said the convoy was probably shot with an "automatic gun" and that one car had been hit by a cannon from a "tank or an infantry fighting vehicle".

Just one kilometre away from the convoy, a Russian state-of-the-art tank was destroyed with a grenade launcher used by Ukrainian troops.

Rubizhne resident Galina Kitsenko was happy to see the Ukrainian flag on her local council building again after Russian troops left the village.