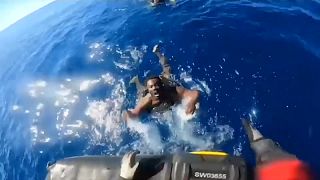 Migrants pulled from the sea during dramatic Mediterranean rescues

The rescue ship Sea-Watch-3 was called into action over the past days as a number of migrants found themselves in trouble in the Mediterranean Sea.

The rescue organisation said that despite their best efforts, not everyone had made it and called for a safe harbour for the rescued migrants to disembark.

“We did what we could, but the survivors told us some didn’t make it. Those who survived saw their fellow travellers die. They have suffered too much, now have them disembark in a safe harbour,” Sea Watch said alongside their video showing rescue efforts on Saturday, April 9.

A separate video posted by Sea Watch on April 11, revealed five people with health problems, including two pregnant women, being evacuated from the vessel on Saturday night, April 10 and Monday morning, April 11.

The rescue organisation said that 205 people remained onboard their vessel having been rescued from the Mediterranean.