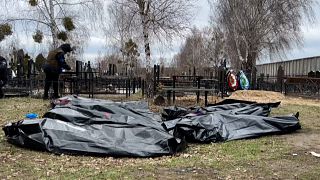 They opened each bag and took notes that could help identify the victims.

According to Ukraine, the bodies of at least 410 civilians were found in areas outside the capital, Kyiv, including Bucha, after the withdrawal of Russian troops last week.

UN humanitarian chief Martin Griffiths said on Thursday during a visit to the town of Bucha that investigators would look into the civilian deaths discovered after the withdrawal of Russian troops.

Evidence of civilian killings in Bucha and other towns around Kyiv that Ukraine has blamed on Russian troops, allegations denied by Moscow, have shocked the world and prompted calls for new sanctions against Moscow.

Russian President Vladimir Putin has denied responsibility for the civilian deaths, accusing the Ukrainian authorities of "crude and cynical provocations" in Bucha.