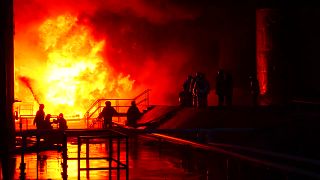 A chemical smell still lingered in the air early Sunday as firefighters in Lviv sprayed water on a burned section of an oil facility hit in the Russian attack.

A chemical smell still lingered in the air early Sunday as firefighters in Lviv sprayed water on a burned section of an oil facility hit in the Russian attack.

The facility was targeted by Russian rockets on Saturday destroying two oil tanks, and the fire was contained early Sunday, according to authorities.

A security guard at the site, Yaroslav Prokopiv, said he saw three rockets strike and destroy two oil tanks, but no one was hurt.

The airstrikes shook Lviv that has become a haven for an estimated 200,000 people who have had to flee their hometowns.

Lviv, located near Poland, had been largely spared since the invasion began, although missiles struck an aircraft repair facility near the main airport a week ago.