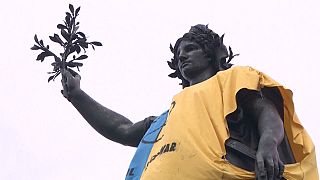 "The atrocities continue": several hundred people gather on the esplanade of Paris City Hall to show their support for the Ukrainian people who are in "danger" since the invasion of their country by Russia.

The statue of Marianne on the Place de la Republique in Paris is drapped in the colours of the Ukrainian flag, with the message "stop oil, stop war" and the signature of the Extinction Rebellion movement.