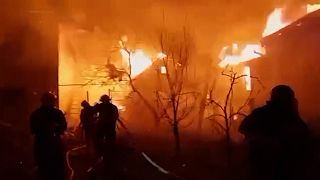 Firefighters in the Ukrainian city of Zhytomyr fought searing flames after what local authorities said was an airstrike by Russian forces on a residential area.

Ukraine's State Emergency Service said in a statement that 10 buildings were damaged, with three on fire, in the city some 140 kilometres (85 miles) west of the capital Kyiv.

According to preliminary information from the emergency service, two people died and three were injured.