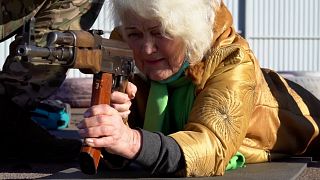 Members of Ukraine's far right movement Azov held military training for Mariupol residents on Sunday to teach them self-defence in case of an attack from Russia.

Members of Ukraine's far right movement Azov held military training for Mariupol residents on Sunday to teach them self-defence in case of an attack from Russia.

Ukraine's far right Azov Battalion, part of Special Forces Unit at Ukraine's National Guard, trained residents to assemble and dissemble a gun, to load ammunition and aim at targets as Russia amassed over 100,000 troops at the border with Ukraine.

A 79-year-old local resident, Valentyna Konstantynovska says she wants to be ready to defend her family in case of a Russian invasion.

Russia denies it intends to invade but has massed well over 100,000 troops near the Ukrainian border and has sent troops to exercises in neighbouring Belarus, encircling Ukraine on three sides.

U.S. officials say Russia's build up of firepower has reached the point where it could invade on short notice.

In a sign that American officials are getting ready for a worst-case scenario, the United States announced plans to evacuate most of its staff from the embassy in the Ukrainian capital.

Britain joined other European nations in urging its citizens to leave Ukraine.