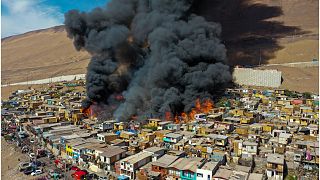 Firefighters faced severe difficulties in supplying their trucks with water.

The National Office of Emergency of the Interior Ministry of Tarapacá said firefighters initially struggled to tackle the blaze as the neighbourhood's water supplies had been cut off.

They eventually managed to operate their hoses using private water trucks that arrived as the flames spread.

The neighborhood's narrow passages prevented fire trucks from entering, so the firefighters made their way in by foot.

Authorities have said there are no reports of people injured.

The cause of the fire remains unknown.

Monica González, a neighborhood leader, said the authorities had been trying to evict residents.

"They have always wanted to evict us from here, but now I'm more decided to stay here until I get my house back," González said.

The municipality is preparing emergency shelter for people made homeless by the fire.